Find mods that turn off health and creepers. IN CASE!

But the current situation? BAAAAD, mkay. Yes, temporary. Dude, why should we wait for a new update? Why not just wait for these certain mods to be updated, then apply them anew. Maybe one of us can make them even.

In the current situation, if health were off, we'd have fun! (Instead of getting hurt BY RECONNECTING.) If on top of that Creepers were off (but monsters on), we'd have MUCH fun!

And this rule probably applies for the future of Minecraft, not just for the current situation. What I am saying is: As long a Notch is too RETARDED to make the lol-simple to implement "player health off/on" server switch and the separate "Creepers off/on" server switch, we're gonna have situations like now. Or like several weeks ago when we tried Monsters. (Seriously, why doesn't he do that? Does he HATE the players? Does he totally IGNORE their needs and wishes? These switches are childs-play to build in. If you're a programmer, you cannot but agree.)

Let's build a bridge and ignore the problems that are vomited onto us. We find and apply these mods and will not fall victim to the whims of the mad-man, only during the mod-update-wait phase.

Also, a mod that keeps dropped items indefinitely would be nice. At least those dropped-by-dying.

As the game currently is, it tells people: You don't want to build. Or collect material. All you want is to GRIEF.

Notch said that he intends to give the player not what they THINK they need, but what they REALLY need (to have fun). I see that this makes sense etc., but in part, he fails utterly to do that. The absence of said server switches prove that beyond doubt.

By the way, these are the two GRIEFERS/DUPERS/?hackers? who kept exploding TNT on the test map just now (e.g. in 1337phreak's base, they were invisible at that time - Notch certainly is telling people: "GRIEF. Don't play."). Certainly too much TNT to make it legit. And someone said that "eminem" was banned. I think these guys might even have more accounts - or are not the same "eminem" anyway. It's not like you need a brain to come up with that name, right. 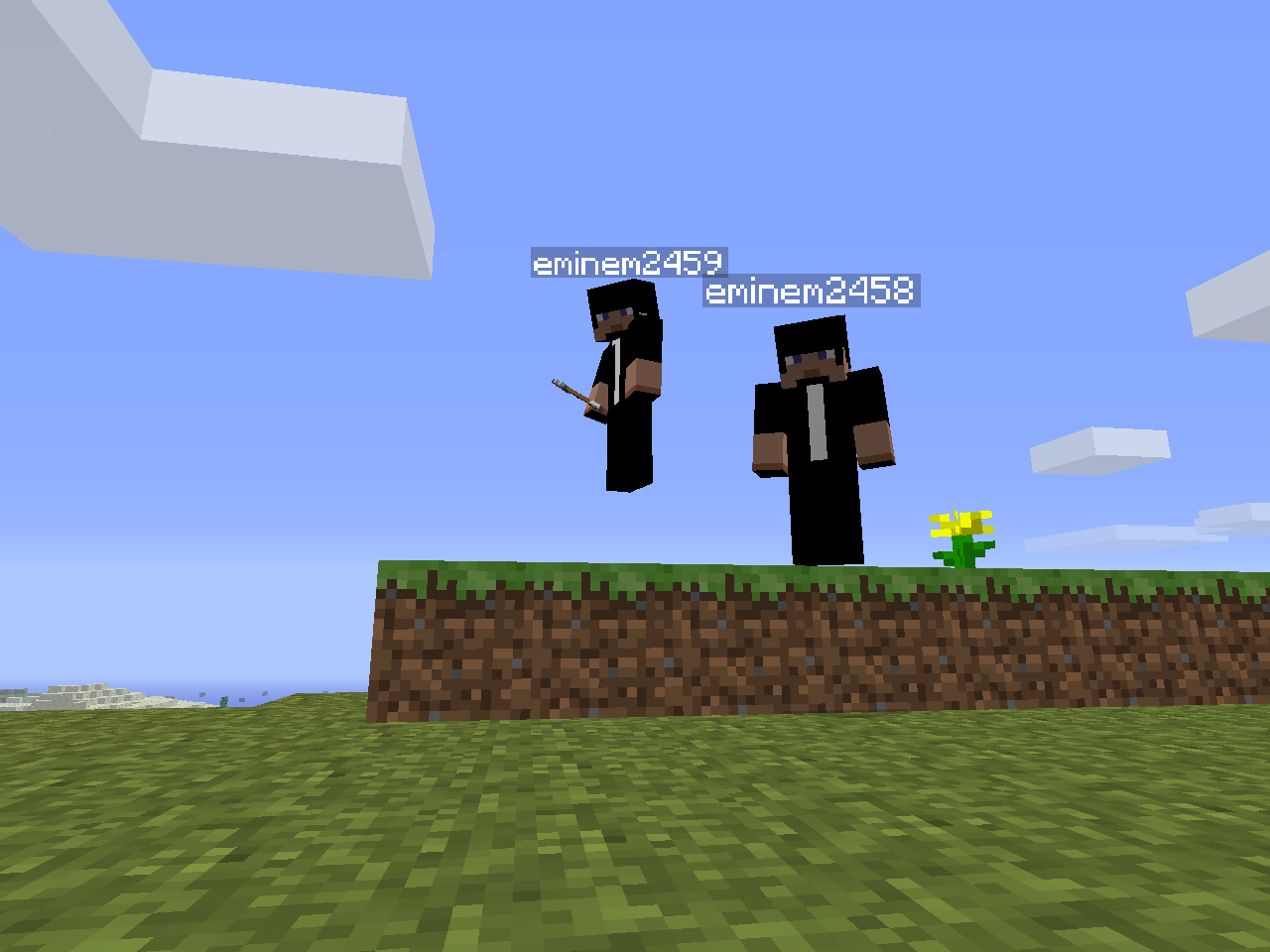 For the moment, however, patience is needed for the coders with the 'know-how' to work their magic.

I may have time to build us custom plugins as these features are very simple to create. Yet my time is limited so we'll see.
T

Let me hijack my own thread for a few thoughts: You know what should be the Minecraft-reality?

Notch should allow us in the minecraft.net player preferences to opt-in for early adoption.

Now, please spare me the "We're all early adopters because it's alpha." argument. That is just dishonest. It's like saying "This 18yo who kissed a 17yo is a child-molester. The guy who abused the toddler is also one." - just because for some sick reason people decide to use the same word, it doesn't justify to use it as the argument. Also, side note: To abuse like this the wonderful feature of "words" that mankind at some point invented, that causes tons of damage. Now how do we fight this? By not abusing words, ok?

Minecraft SMP worked. We were having fun together in the Minecraft world, and it was not creative mode (another dishonest argument). In creative, you have all materials in infinite quantity right from the start. No adventure - just building. We, however, hammered down hard on anyone who duplicated materials. We started journeys to find clay etc., and we traded. We did not play Creative. It was a limited version of Survival. And now? We went back to alpha!

Better and easier to review feedback

With such a huge amount of players, you can be sure that there would be people who'd choose to be early adopters. And Notch wouldn't be flooded with feedback - he'd only get the feedback from that group, which might even raise the feedback quality.

The others would happily keep on playing the to that point working game. Their clients would not update. I am ok with the central authorization server. I am not ok with the forced client update! I want to opt out of that!

Speaking of which, I will make the client updater ask the player before applying new updates. Automatic forced updates are scary, and they were only in because they were convenient and I never thought about it.
Click to expand...


Does Notch not care that 500,000 people (!) are already enjoying the game and don't want it to, you know, just break? I am a programmer myself at work. When I change a program that others use and do fail in the process, I feel something like guilt. If I were responsible for the program that 500,000 people use, I would at least have a separate test group! It's not rocket science!

But maybe the problem is that it's still alpha. The developer, I mean. OMG, the blasphemy! Dude, could just look at the facts and WAKE UP!?

Mod developers would have time to adapt their mods

... while we can still happily use the old versions. Because we wouldn't update our servers and clients like blind greedy flies. Oh, wait. My mistake. We didn't have a choice!

IMHO: The problem is attitude.

I don't understand the way Notch thinks. Really not. Why is he forcing everyone into the new and apparently hardly tested reality that he programmed? Does he consider his decisions supreme? Why doesn't he give the option to have immortal players, to have monsters but not creepers, or maybe to turn each monster type on or off individually? Do all 500,000 people really have to feel and experience in the same way to be fit for the Notch universe? I see the legal maybe-implications of modifications and that this might be a reason that he officially does not value them. But does he in the secret chambers of his mind really reject the work that the people are doing to make the Minecraft universe bigger - or to, you know, make it working at all? (Example for the latter claim: Without /sethome and /home, Minecraft SMP wouldn't be what we have grown to love.)

Why does he display such a sick "As Notch intended." attitude? Did he fall for the same trap that so many people fell for and that so many stories and movies describe and teach us about? (People were celebrated too much, lost the ground under their feet, felt higher than the commoners, began to suck, but why would they care in their cloud temples.) Or can't he come to grips with what it means to have such a huge user base?