LiddieMac said:
For all the people who want to leave CC, DON'T.

At the time, it may feel like you want to leave, but inside you know its not what you want to do. Many people are frustrated with the reset. A few of my friends from this server are telling me how they want to leave. I once made the decision to leave CC, and look at me now. I'm back and here to stay. You shouldn't make rash decisions based on one thing. You have awesome builds on CC correct? Then why don't you build something even more magnificent. 1.9 is a major combat update, and I have a feeling that there will be many recomendations and additions to the games world for PVP. You shouldn't leave the community because of something simple like this. We, CC, are a community, don't leave us.

A message from someone who cares... a lot.
-LiddieMac
Click to expand...

Funny how I liked this message a couple days ago, wondering whether I was going to leave or not, after 3 years on here, and thousands of hours of active playing...

I'm going to make this short, and anyway, I don't think many of the current members are going to miss me, I haven't been very active lately.

I banned myself earlier today, for a lot of different reasons, which I don't want to get into.

Yesterday evening, LiddieMac, who was the first friend I made on here, LiddieMac and me went back to Survival3 (the legacy world), where we had first met. Where I had first fell in love with CC and the community, where I had so much fun mining and building with all the people that were there at the time.
We went back there because, with the reset, well, those worlds were going to be archived forever. And well, I was nostalgic about the thing and wanted to see the place one last time, before moving on.

I now realize I was actually saying goodbye to CC. There is a point where everyone has to move on. I joined on here for the bitcoins, stayed for the community, and even if the server may not be as crowded as it used to be, the spirit of CC goes on. Not necessarily on the server, but through the thousands of friendships that have developed on there, and that have expanded far beyond a mere Minecraft server. Heck, DrMadFellow and katherine_a even got married!

So yes, I am leaving CC, but no, I'm not leaving this community. Because I have made so many lifelong friends on here, and that is never going to disappear. I may lose track of some of them, but ultimately, the memories are still here.

Thank you so much, SgtSpike, for creating this server and maintaining it. Who would have thought that this would be so, so, so much more than a Minecraft server? Who would have thought I'd smile, laugh and cry so much with people that live thousands of miles away. Thank you, from the bottom of my heart. That would never have happened to me "in real life". And I will make sure to keep donating to you for as long as I can, because what I found on here was priceless. Thank you.

And here is, in random order, a list of all the people who made my CC experience so great. Some of them will never see this message, some of them got banned, some of them will be surprised to see their name on here, but if you were in this list, then I considered you as a friend.


@xstargamingx - See you on Skype :P
Shadow_Knight - I think @CrazyShadowy is your new name?
@levant_de and his awesome team of Germans
@suben380
@eaglestallon - Eagle, I've always held you in very high esteem. The world needs more people like you, and I hope you will live a long and happy life. I wanted to say that.
@Sisyphus1339
@Zhiqing
@Liontamerx
@BoureySR85
@Samthebeast127
@The_XTorinX
@BadgerGaming1539 - Despite being my worst nightmare in Factions
@Keelan1998 - I owe you VIP, don't I? Or was it VIP+? Hey, PM me about that, I'll do it
@HypePlays
@HivemindOmega
@LiddieMac - Hey, now, don't forget to give everyone their books..
@bmlzootown
@ironheart86
@Mac, - Hope to see you on Skype sometime soon?
@EmeraldBlocks - Hey, you are an amazing builder, and you also draw really well! Take care of yourself and your cousin

@sophiesly - Yep, did it..
@J_Craft
@MajorWhupass
@TGWaffles
@millainw
@PurpleSweetTart - I will miss seeing you on the server, I hope you still play
@DuncanManagement
@mad_cal1993
@Slurpy
@BlueRazor71 - You already know everything.. See you on Skype soon, my friend
@QuantumTunnler
@__Ronin__
@Sobk
@MsRowdyRedhead
@Marine03 - Awesome work you did in Games, I hope that'll keep going
@JamesStBird - I always had a lot of respect and admiration for you. Good luck with everything.
@zombieslayer9099
@SgtSpike - I'll never be able to thank you enough for everything you did. I'll just try to keep donating to you as long as I can.
@cikkirock - I hope everything goes well for you, haven't seen you in a while
@darkning40
@Morceman - The amazing Walrus man!
@firelightningblt
@bigierc617
@AndreAwesome
You guys might still see me on the forums, we'll have to see about that 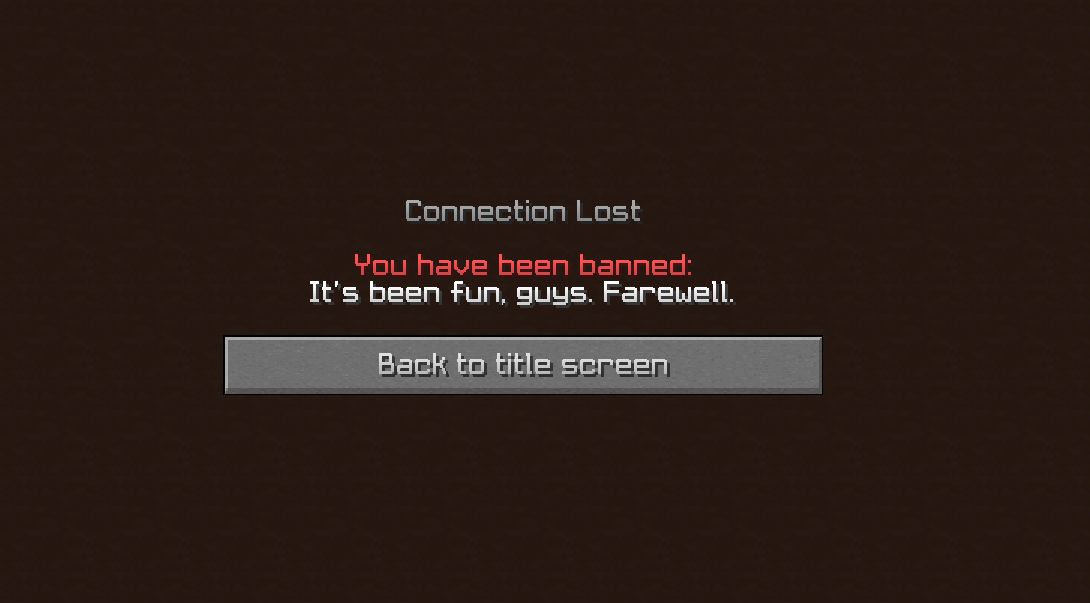 Heck, yes, it's been a lot of fun. Thank you guys for making this possible.

You are awesome. I love you guys.

You've been unbanned from the server.

hacattack3000 said:
You've been unbanned from the server.
Click to expand...

I would like to stay banned, if possible. I mean, I could do this the hard way by logging and in griefing, but as you can imagine, I have no desire to do that... Anyway, could you ban me and leave me that way?

Anfasa, it's hard to see another one of my friends go as I have had a decent bit leave and never come back, or just leave and never say a word. I am glad most of my friends do have the heart to say one last goodbye but....I won't be saying good bye as you will always be here with us as a member of this amazing community.

I will admit again like I have in the past, I originally came here for the bitcoin but, stayed for the community that had taken hold of me over my first few months on here.

It will be sad not seeing you around, but just know that I will always be very happy when I do get to see you again.

I will miss you but I am also wishing you the best of luck with anything you plan to do in this thing called "Real Life." But remember that you always have loving and caring friends here.

Staff member
It's sad to see you digitally depart from us, Anfasa. I'm happy to hear you recognize the continued relationships you've built here and intend to maintain as best as you can from a farther distance, so-to-speak. It is touching to catch a glimpse into your many friendships and I feel the same way about this community. Knowing that you had such good nature, I lament the fact that we've never had the chance to connect, but I'll miss you anyway. Best of luck and enjoy the rest of your life! Make it count!!

Staff member
I am sorry to see you leaving, Anfasa. Your contributions to the community have been many, and will be remembered. It's always tough to leave a place where you have had friends, and fun, good experiences and learning opportunities. You will likely remember these days for most of your days.
I encourage you to maintain as many of those friendships as you can. I am sorry I did not get to know you myself. I feel it is my loss.
I love the way you had your nostalgic moments.. bittersweet as they must have been.
I wish for you a life full of memorable moments. May you live to reach your dreams, and may each day bring you a bit of joy.

Anfasa, you will be dearly missed. But I wish you luck on your next adventure.